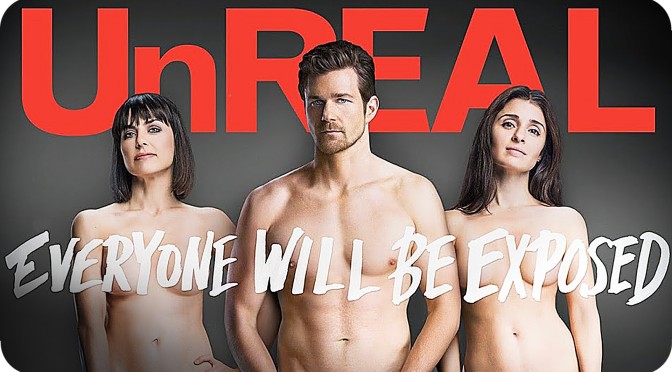 I’m rarely prompted to write about a programme I’m enjoying. I’ve written some oh so witty recaps for an as-good-as-defunct website in the past but apart from that, I’m usually hearing about programmes once someone’s already said they’re good. I think Transparent is utterly incredible: so does everyone else.

But I had heard nothing about UnREAL when I started watching it, I just finally gave in to the relentless suggesting of it on Amazon Video. And man, it’s good. The premise is fascinating, and UnREAL does it super well. UnREAL is a drama set behind the scenes at a hit reality show and as such, lets us glimpse behind the magic and into the machinations that make such shows happen.

At the centre of UnREAL is Everlasting, a reality show almost identical to The Bachelor, which is now about to enter its 21st season in the US. The Bachelor has been around so long that it’s easy to forget how huge it has been, and the extent to which it created the blueprint for dating shows. In the post-writers’ strike days of reality programming, The Bachelor is a behemoth. Looking at its Wikipedia page, The Bachelor has been accused of being scripted and I have no idea of the extent to which this is true, but UnREAL takes as its starting point the idea that the show isn’t scripted, but that the Producers manipulate every detail to produce the result they want. This includes cajoling, flattering, and criticising  the contestants into acting the way they want, which is as compulsive to watch as it is horrifying. And some of the ways they manipulate the characters is watch-through-your fingers bad, pushing buttons and using the mental health issues of the contestants to push them in to an emotional, sometimes extreme, reaction. Which is to say that it’s so entertaining! While I do like to think that Producers on a real show wouldn’t go quite as far as they do on UnREAL, I could well be being naive.

The co-creator of UnREAL- along with Marti Noxon, who is probably most famous for working on Buffy the Vampire Slayer- is Sarah Gertrude Shapiro, who originally wrote the acclaimed short Sequin Raze, on which UnREAL is based. Shapiro worked on The Bachelor for nine seasons so I suspect she knows a thing or two about the show, but it is her personal reaction to working on it that I find so interesting, and is what makes UnREAL so compulsive for me. Yes, it’s fascinating to watch the manipulations and machinations, and to see the dynamics between the people working on the show as they simultaneously compete with each other and strive for a common goal. But it’s the characterisations that make me go back to UnREAL for episode after episode, long after that point that I lose interest with most series.

UnREAL has two main characters and they are both women. That genuinely doesn’t happen often, and when it does the female characters are rarely as flawed and complex as these two. Rachel is very definitely the heroine of the piece, dragged back to work on a TV show she finds morally repugnant but that she is so very good at producing. But Rachel also makes terrible decisions- and selfish ones- and acts in a way that makes you want to shout at her sometimes. She is stuck doing something she hates but is incredible at and we watch wondering whether she will destroy herself. She’s also played by the ace Shiri Appleby, who was so great in Girls, and brings a real humanity to the role. Rachel is bright, capable, right-on and likeable, and sometimes she is a pretty bad person. Luckily there is her boss, Quinn, the show-runner of Everlasting, to make Rachel look good. Quinn is vicious, cutting, hard-nosed, witty, and angry, and also a multi-layered character with human relationships, hopes and dreams. Looking at the other roles Constance Zimmer has had, I can’t pin any one thing down to where I recognise her from, but she has been in a lot, and I love her in this. Two female characters who are selfish and single-minded, successful and intelligent, and you still manage to like them for at least some of the time; I can’t think of another example of this. It happens slightly more in our new, amazing golden age of television, but usually as an ensemble cast or in a sitcom; a genre where the reality of complex human relationships is often lost. in UnREAL there are other fascinating characters, not least a gay character who isn’t a horrible stereotype, but it’s the women who run the show. It shouldn’t be surprising, but it is.

UnREAL holds a mirror up to reality TV and all of its racist, homogeneous tendencies. The drama of the show that is being produced is almost matched by the drama going  on behind the scenes, but I don’t find anything camp. Of course there are times where there has to be a little suspension of disbelief, but even watching episodes back-to-back UnREAL stands up. This is something I struggle with when I watch episodes of anything close together as so often the characters suddenly change their mind about things that were so important an episode ago, in order to advance the plot. UnREAL does a pretty good job of staying true to its characters and smashes it out of the park when it comes to the Bechdel Test. I’m thrilled that a third season is coming and heartily recommend this show. Now someone watch it so I can talk to you about it.