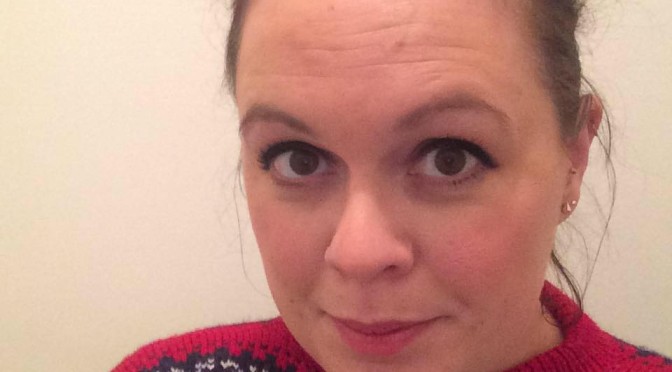 In general I don’t make New Year’s resolutions. I used to make them, and most Januarys I definitely need to slow down on the cheese and spending, but then I see a Whistles coat in the sale, and arrange many dinners because I have such horror at the idea of Boring January, and so resolutions don’t seem to have any relevance for me. If I want to make a change, I reason, why not make it when I decide it’s worth making, rather than waiting for the calendar to tick over to the next year? I know Christmas excesses play a part but all in all, I just can’t be doing with it.

Except that this year, I am. My 2014 included moving in with M, our first holiday together, and all that those exciting things involve. We’ve had a bloody good time but a few small tweaks need to be made, and after a post-Christmas period that saw me rolling around with insanely painful stomach problems, I’m ready to do some housekeeping.

I read all the time. Moving to East London, I’ve shaved around 30 mins off my former commute but I’m still looking at a minimum of an hour and a half door-to-door. As soon as I get a seat on the tube my Kindle gets whipped out. I never don’t have a book on the go, and I like to read last thing at night too. However, that commute is a killer. On top of this, I’m usually pretty tired in the morning as my need for kip is closer to the cat’s average hours asleep than a humans’. So I get tired, and I get lazy, re-reading beloved crime novels because it’s fun. But learning stuff is fun too, and feeds the mind; it’s why I listen to a Woman’s Hour podcast most days, and then go home and bore M with what I’ve found out. I was lucky enough to get  Bad Feminist by Roxane Gay and What Should We Tell Our Daughters? by Melissa Benn for Christmas, and I have The Book of Jezebel, Lena Dunham’s essays, and lots of other lovely Feminist tomes waiting for me on the IKEA Kallax it took me three hours to put together. So my very first resolution, after such an awesome Christmas haul, was to make inroads into my book collection ay-sap.

When I was at university, I had for a while a dalliance with what we will call A Very Low Maintenance Look. Beanie hat, baggy jeans, hair tied up- you get the picture. But regardless of sartorial misfires, the five-minute walk from Mile End tube station to the college did horrendous things to my skin, and my forehead in particular was a dry, sore mess. I tried a lot of lotions and moisturisers but when your skin is angry and irritated- and I’m talking dry and slightly sensitive skin, not the type that needs specialist advice- you have to start with how you clean your skin. When I was in my skin crisis all those years ago I finally found Liz Earle Cleanse & Polish, and my skin became the skin I always knew (hoped) it could be! But, for the same reason that I’ve been stuck in a rut literature-wise, I’ve skipped Liz far too many times over the past few months in favour of a quick-fix face-wash.

Made up of all sorts of botanical goodies, and no nasty stuff, Liz Earle products are calming and hydrating, and I don’t actually know of anyone who hasn’t tried them and benefited. The wonderfully soothing Cleanse & Polish is put on to dry skin and then taken off with a hot cloth or flannel and the Tonic that follows boosts your skin further. I feel distinctly less scaly after a few days of using Liz Earle.  While handy in an emergency, I really hate cleansing wipes but use one- or my personal favourite, micellar water on cotton pads- before you hot-cloth-cleanse and you’ll find your cloths look less like they’ve been dipped in clay. My skin isn’t thanking me for my skin care rut at all, and I know what the right thing to do is so I’m making the change. Again.

Yeah, sorry: predictability claxon. One of the most pretentious reasons that I don’t usually make resolutions is the fact that I don’t want to be the same as everyone else: I want to make my decisions, when I want to make them, and anyway January’s such a downer after Christmas so why do dry/diet/gym with a gazillion other sheep? But this year, like every other bloody person, I am back logging in to MyFitnessPal, firmly attached to my Fitbit, and counting every last calorie and step I can. And what’s extra galling is that I did all this before, and it worked. And then I drank all the beer.

Of course my relationship with my weight is weird, complicated, and uncomfortable- isn’t most people’s? In 2011, a year after leaving a job in which I was truly miserable, I was ready to make some positive changes, and after a work trip to Copenhagen produced some photos I’d be quite keen to never see again, I finally decided I was in the right place to lose weight slowly, healthily, and positively. I lost two dress sizes and at 5’11” and a size 16, I felt superb. Of course if I could click my fingers I would have liked to be a size 14 (I’d try things on in The Kooples!), but everything I had told myself and not quite believed was actually true. A sexy, confident weight for me was at a size 16 and fuck what the rest of the world says- this was my skinny. It took me two years to lose two stone, but I was very happy and spent many of my hard earned GBP in beautiful shops like COS. My style developed and I had a new way of carrying myself. And I met M, which I truly believe that old me couldn’t have done, as old me didn’t think she deserved it. But I’m now about 7lb off being right back to where I started and I can still taste how good it was to feel confident and relaxed in my clothes. And I have a wardrobe full of them to prove it! Getting that weight back off isn’t an attempt to fit in to other people’s idea of how I should look or what I should wear, but I can’t wait to get back in to some of the beautiful Scandinavian goodies I own and walk tall: I did it before and I know I can do it again.

So, my usual resolution of not making resolutions has been broken! I am a predictable sheep, bleating her way into 2015 and browsing workout gear at lunchtime. Writing this piece has really highlighted to me how much I need to concentrate on getting more and better sleep, so I can give energy to the things that I need and enjoy, and I know that I have to focus a little better on my health.  Soon I’ll be sick of calories and ‘active minutes’, as will everyone who knows me, but for now I’m happy to have taken back control of my life, muslin cloth in hand… 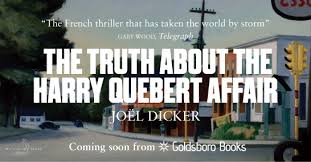 Ooh, a book review, how thrilling!

Do bear with, this won’t last long and The Truth About the Harry Quebert Affair is the first book in ages that I actually couldn’t put down. It was a proper finish-it-at-1.30am-even-though-I-need-to-get-up-early-tomorrow job.

The premise is simple: a writer from New York travels to New Hampshire in order to prove that his friend, mentor and former university lecturer, Harry Quebert, is innocent of murdering a 15 year old girl over thirty years previously with whom he was having a love affair. Cue lots of reminiscences, local townspeople getting upset, and general thrills and spills as we follow the writer, Goldman, on his quest to free Quebert.

This, to me, is not particularly literary – I don’t think it will be nestled between Salman Rushdie and Kingsley Amis in your local Waterstones – but it is excellently written with some genuinely, as my colleague puts it, ‘shit the bed’ moments. Perhaps what is remarkable is the fact that the novel is written by a French author, Joel Dicker, in his native language and then translated. You would never know it, and that in itself is exceptionable.

One little niggle from me is that sometimes the dialogue doesn’t feel entirely natural. The 15 year old girl at the centre of the whole thing also got on my nerves from time to time. Don’t let this stop you in any from enjoying this book; it is easy to read and incredibly rewarding.

If you commute, have recently read something bad/tricky to get through, have a late summer holiday planned, or even if you can just read words on a page, then do yourself a favour and pick this up. And let me know how you get on please! Apologies in advance for anyone who hates it.