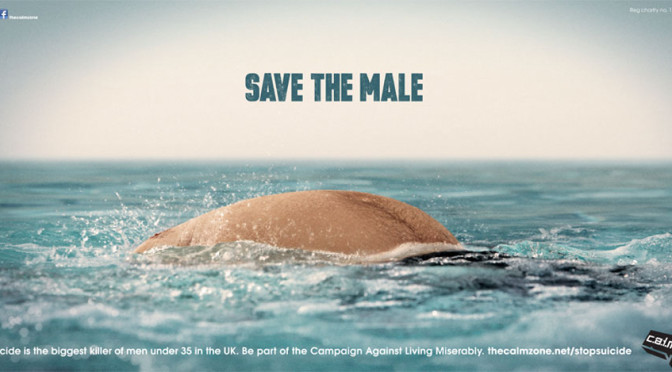 If you buy, or spend time with someone who buys, any magazine aimed mainly at men, you will most probably have seen the ‘Save the Male’ campaign being run by CALM. Even if you haven’t registered the message, you may have seen the eye-catching image of a man’s body, mostly submerged in the sea.

I first became aware of CALM when I worked at the British London 10K this year and spotted just how many runners CALM had; they stuck out because their fundraising t-shirts are orange, the same as our runners’ were, but the sheer number struck me too and I sought out the charity to see what they were about.  CALM is ‘the campaign against living miserably, .. a charity dedicated to preventing male suicide, the biggest killer of men aged under 50 in the UK.’  Later, I started seeing the adverts on magazines, and buses, and it got me thinking.

There is some controversy around the oft-quoted statistic that claims that the biggest killer of women aged 15 to 44 is men, but there is no doubt that, while instances of crime in general continue to fall in the UK, we still see two women killed a week by a partner or ex-partner.  The TUC estimates that one in four women will have to take time off work at some point due to domestic violence, a statistic that sits uncomfortably in as rich a country as the UK. We all know, right now, a woman who is suffering from intimate partner violence. And the prejudice of “why doesn’t she just leave?” is deeply ingrained in our societal consciousness, as well as a belief that some arguments just get out of hand, some couples just wind each other up, some women could do with a slap. But what story starts to emerge if we think about CALM’s statistics on male suicide in conjunction with rates of domestic violence? What is our society saying about men if violence towards themselves and others is so prevalent? Surely both domestic violence and suicide are symptoms of not knowing how to cope, a deep unease with the world, even if they do present in very different ways.

I feel that it is appropriate at this point to write a few words on domestic violence experienced by men, inflicted by women. Intimate partner violence, whatever the gender of those involved and whatever the sexual orientation of the couple, is disgusting. We all feel anger with our loved ones at times, especially in romantic relationships, but to physically abuse another human being is truly immoral. And when it is an intimate partner, a husband or wife, the pain of domestic violence goes so much deeper than the physical, and the feelings of shame are well-documented. Estimates on DV experienced by men in heterosexual relationships do vary but around 1 in 4 of DV incidents seems to be an accepted statistic, and this points to it being a huge problem. My caveat on mentioning this statistic would be that the remaining 3 in 4 violent incidents are against women, who physically are more at danger from the violence, have a higher number and more serious injuries, and that around 80% of continuing violence is perpetrated by men on women. I have always said that there is room around the table to discuss all types of domestic violence, and I am not dismissive in any way of men suffering intimate partner violence; we need to support those men, but it doesn’t negate the extent of violence against women.

One of CALM’s three mission statements is “We believe that if men felt able to ask for and find help when they need it then hundreds of male suicides could be prevented.  We believe that there is a cultural barrier preventing men from seeking help as they are expected to be in control at all times, and failure to be seen as such equates to weakness and a loss of masculinity.” I would hazard a guess that a very similar statement could be made regarding domestic violence, that men feel too much shame to ask for help and feel that there is a cultural assumption working against them. Deeply-entrenched cultural assumptions are massively, indescribably harmful to men and to women; assumptions based on gender only serve to pigeon-hole, and ignore individuality and difference. The same assumptions that tell women that they’re too emotional, too bossy, can be valued only on their physical attractiveness, attack men for not being traditionally masculine enough, dissuade them from seeking help when needed, and use the word ‘mangina’ to try to nip progressive thought in the bud. Male suicide rates are another way we’re reminded that the world needs feminism, for men as well as women.

For help and information: